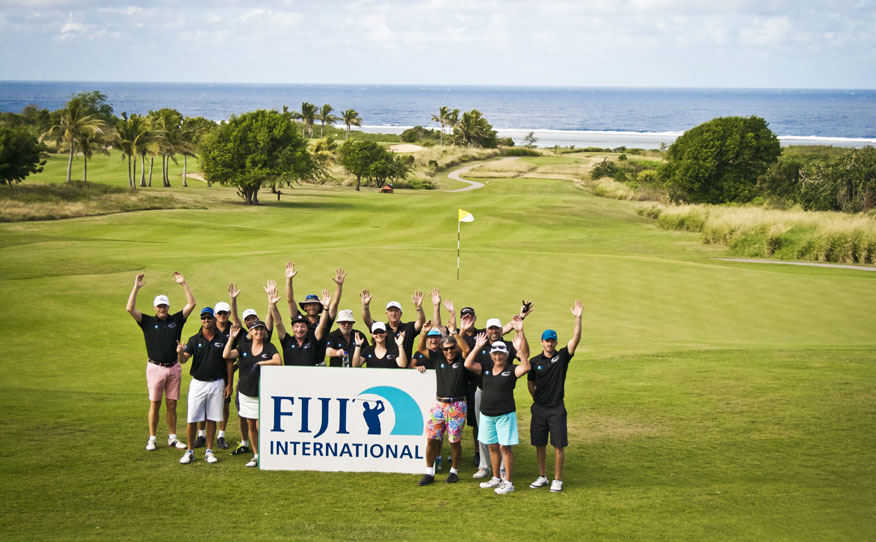 Golf Getaway and Tourism Fiji staged the inaugural Golf Getaway “AXE” Tournament for passionate social golfers from Australia at the world famous Natadola Bay Championship Golf Course recently, with one lucky winner winning a spot in the Fiji International’s Pro Am tournament to be held in October.

Over FJ$150,000 worth of tourism dollars was earned for Fiji during the tournament through expenditure on accommodation, golf, daily events and extended holidays. The Axe Golf Tournament therefore ticks one of the boxes for the Fiji International encouraging increased golf tourism dollars for the nation.

Andrew McCombe, Managing Director of Golf Getaway – Australia’s only Golf Travel Television Show said the tournament was a resounding success with the attraction of the Pro Am prize highlighting that the Fiji International was the ideal link for passionate social golfers who love travelling to new destinations.

“By working with Tourism Fiji and creating golf television shows in Fiji we are able to educate and inform Australians on how fantastic a golf destination it is, whilst encouraging growth for the accommodation, cultural and tourist sectors at the same time.” he said.

Nineteen golfers from across Australia (with almost 30 of their friends and family along for the holiday) enjoyed a two day Golf University clinic and practice round with Andre Stolz.

Matt Porm, Head of Commercial for Sports and Entertainment Ltd, the PGA’s commercial partners for the Fiji International, presented the overall winner, George Khouri, with the IWAU (a traditional carved Fijian Ceremonial Warrior Club – the inspiration for the AXE Tournament.), a playing spot and a Caddy Spot in the 2015 Fiji International Pro Am with hospitality access, and 3 nights for two people, including breakfast at the Yatule Resort.

“We never thought of Fiji as a golf destination and after our visit we soon realized how amazing it was and on par with any golf course in the world! What’s more is it is only three hours from Australia. I am going to tell my friends to come next year for sure!” MrKhouri said.

The A grade winner was Nathan Faulks while his wife, Paige Faulks was the Women’s winner both winning a MGI caddy star electric golf cart and Sureshot micro 300x GPS unit.

“Fiji is the perfect destination for golfing couples who have children. The Kids Club at the Intercontinental is a great place for children to stay occupied in a safe and fun environment whilst their parents play golf. The Fijian hospitality and care for our children was fantastic”, Said Paige and Nathan Faulks.

Third place was Marcus Fanning who took home the Brain Fork Trophy and 3 nights for two people, including breakfast at the Viwa Island Resort which includes sea plane transfers with Turtle Airways and an additional 3 nights including breakfast daily at Wananavu Resort.

There were events every night including a Lovo night, Andre Stolz story night, a welcome cocktail with fire dancing and a Gala night on the beach at Natadola.

Andre Stolz is one of Australia’s most popular professional golfers and a regular guest on the Golf Getaway television show. Andre has played and won 10 events worldwide on the PGA Tour of Australasia, European, Japan, Nationwide, PGA and One Asia Tours, including winning the 2004 Michelin Championship at Las Vegas, the Thailand Open, Indonesia PGA and was the 2011 One Asia Order of Merit winner.

“Being self-taught I am fully aware of the trials and tribulations we all experience trying to master this great game and ultimately I just want to share my knowledge and experience to help golfers avoid the struggles and ease their pain so their game can grow more effortlessly.” Andre Stolz said.

Next year the Golf Getaway Axe Tournament is planned for straight after the Fiji International 2016 with the concept of watch the pros, learn like the pros and play the course like the pros.

About the Fiji International

The 2015 Fiji International will be held from 15th – 18th October at Natadola Bay Championship Golf Course.
The inaugural Fiji International, boasting a million dollar prize purse, signalled Fiji’s official arrival onto the golfing world stage with the Fijian Government, Fiji Tourism and Fiji’s number one golf ambassador, Vijay Singh, all making a push to put their country on the lucrative world golfing map.

As the newest tournament on the PGA Tour of Australasia and OneAsia tours, the inaugural Fiji International was a resounding success.

120 players from 16 different countries came together at the spectacular Natadola Bay Championship Golf Course to take on the challenging layout, designed by local hero Vijay Singh, to compete in the regions first ever internationally broadcast tournament.

Hitting the very first tee shot of the Fiji International, Steven Jeffress went on to make history by sinking the last putt of the tournament as he birdied the 18th hole to claim the title by four shots from fellow Australian Jake Higginbottom.

Further information is available on www.fijiinternational.com